The extra tax is due to reforms introduced in 2015 to tackle profit diversion.

In 2018 to 2019, HMRC stepped in to ensure the correct tax was paid. This secured over £10 billion in additional tax revenue from the largest and most complex businesses – money that would have otherwise gone unpaid.

The Diverted Profits Tax (DPT) has revolutionised the government’s approach to countering arrangements intentionally used by some multinational corporations to shift their profits abroad and avoid paying tax they rightly owe in the UK.

DPT was introduced specifically to change behaviour – only being charged where businesses aren’t paying the right tax in other areas, principally Corporation Tax. Companies risk being charged a higher rate of tax (25%) upfront if HMRC believes the tax applies.

As a result, many businesses are choosing to cooperate with HMRC investigations and to change their behaviour and pay Corporation Tax on their UK activities rather than the higher rate of DPT.

The UK’s transfer pricing rules set out how transactions between connected parties are priced for tax purposes. This includes transactions between companies in the same group. The rules ensure that the UK can tax its share of profits in accordance with the internationally recognised transfer pricing principle (known as the arm’s length principle).

HMRC challenges arrangements that do not allocate the right amount of profits (the arm’s length amount) to the UK. The transfer pricing rules and the Diverted Profits Tax (DPT) are important elements in a range of measures to make sure multinationals pay the right amount of tax on the share of their profits that arise in the UK.

Figures published today show that since DPT was introduced in 2015 it has helped HMRC to secure a total of £5 billion by: 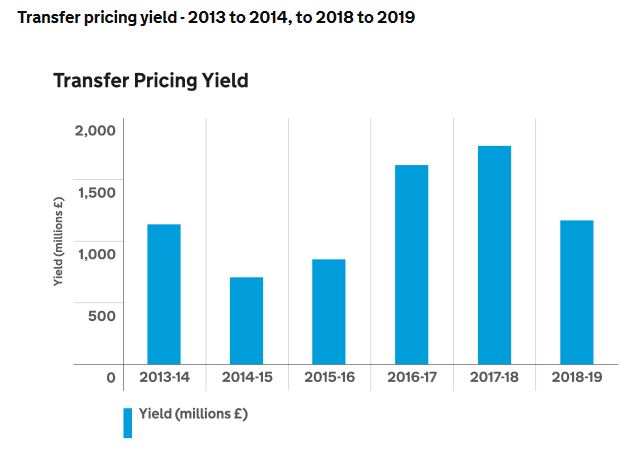 So far in 2019 to 2020, HMRC has secured another £480 million through DPT investigations, bringing the grand total to £5 billion.

HMRC has seen an increasing number of businesses changing their behaviour, structures and policies. These changes include increases in both Corporation Tax and VAT as the amount of DPT receipts begin to fall away.

2018 to 2019 saw business restructurings that will increase VAT billed through UK companies by around £1.8 billion. Also in 2018 to 2019, more than half a billion pounds was secured in additional Corporation Tax from diverted profits investigations.

“I’m pleased to say we’re making progress in tackling those who think it’s ok to shift their profits offshore and avoid paying tax in the UK on their economic activities here. The £5 billion secured so far since the Diverted Profits Tax was introduced shows that it’s helping to bring in additional money for the UK’s vital public services.”

HMRC has also been finding new ways to drive behaviour change where companies persist with contrived arrangements to divert profits. The agency has launched a Profit Diversion Compliance Facility (PDCF) in 2019 to encourage businesses to bring their tax affairs up to date quickly and efficiently – we released guidance to businesses informed by our experiences in investigating profit diversion and are calling on businesses to read our guidance, review their tax affairs and, where applicable, use the facility to disclose any additional UK tax liabilities from the past. So far, it’s been used by around two thirds of the large businesses initially targeted to use it.

HMRC is now mobilising even more resources on investigating businesses which continue to divert profits, made possible by the successful PDCF work. The agency is currently carrying out around 100 investigations into diverted profits arrangements by multinationals.

The amount of tax under consideration as part of the ongoing investigations was £2.9 billion as at March 2019.

The tax is an estimate of the maximum potential additional tax liability in each case before we have carried out a full investigation of the specific facts or analysis of relevant law. It is not actual tax either owed or unpaid, it is a tool to guide our enquiries to focus on the most significant risks that exist at any particular time with the largest businesses. In 2018 to 2019, HMRC issued 203 DPT preliminary notices to 11 customer groups and 204 DPT charging notices to 13 customer groups.

Where HMRC believes that DPT may be due, a preliminary notice is issued. Depending on the company’s response, HMRC may then issue a charging notice setting out the amount of DPT to be paid by the company within 30 days. Companies have 3 months from the end of the relevant accounting period to notify HMRC that they are potentially within scope of the legislation. HMRC then has 2 years to investigate to determine whether it is reasonable to issue a DPT preliminary notice.

In many cases, HMRC finds out that there is some lesser liability or even no further liability at all. Tax under consideration will naturally vary from time to time as outstanding issues are settled and new risks are identified.

Quote of the Day

“Your kids will grow up to imitate your financial habits. Will you like what you see?”

How many people lived in fear in the summer of 1914, dreading what might happen? Come to that, what about 1939? People must have known that they were living on a precipice then, just as we are now. A disaster is about to happen, but there seems to be denial all around. A thread

This week we will hear a lot of screaming from low or zero tax companies about how everything will implode if they have to pay taxes. Don't buy it. https://twitter.com/POTUS/status/1554127315847847937

This maps well to my life

Colo and Utah don't want the price risk associated with accepting crypto for the payment of taxes. Here's how they would manage that risk. Great job by the @tax graphics team.

Received this out of office response:

Disappointed I wasn’t given the time zone as well.

We are hiring: Join our great team of tax researchers as assistant professor! If you have questions about it, feel free to write me! #tax #research https://twitter.com/NoCeTNHH/status/1544293368339079169

As part of my PhD, I've spent a lot of time searching for data on corporate income taxes, multinational enterprises, international trade, etc.

I just listed 100+ databases I came across/worked with. I hope it can help! 👇